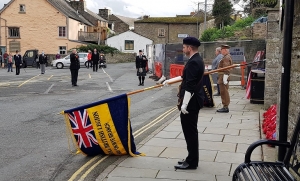 A return visit to Hay-on-Wye today.  Bagpiping for the Armistice Day parade. This signifies the signing of the surrender document at the 11th Hour, on the 11th Day, of the 11th Month in 1918 after WW1.  The parade took place by the War Memorial in Hay-on-Wye.  This was organised and conducted by members of the Royal British Legion Hay-on-Wye Branch.