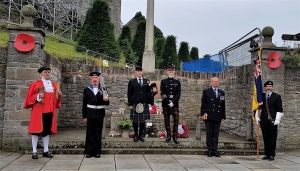 VJ75-Service Royal-British-Legion Hay-on-Wye 15th Aug, 2020.   Bagpiping last night with the Royal British Legion Hay on Wye Branch. This was for the #VJ75 commemorations at the Town War Memorial.  This was as usual, a very well attended event.  Therefore, as a commemoration, I played “Flowers of the Forest” after the last post.  As well as, “Oft in the Stilly Night” during the wreath laying.
In addition, at the end of the service, I played the traditional “The Battle’s O’er”.  In conclusion, this was accompanied by two other 3/4 Retreat Marches; “Castle Dangerous” & “My Land”.  Above all, it was another excellent and well organised service by members of the Hay-on-Wye Royal British Legion Branch.